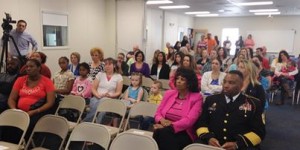 Leland, Whiteville – Two local charter schools, Leland’s Charter Day School and Columbus Charter School in Whiteville, held enrollment lotteries last week. Resulting numbers reveal that community interest is significant.Lotteries are used to select students when there are more enrollees than available seats in a particular grade. This year, the volume of interest resulted in Columbus Charter School adding its first Kindergarten lottery since opening in 2007. School-wide, over 70 students were waitlisted for the 2014-15 school year.

That number was double at its sister-school, Charter Day School in Leland, which had to waitlist over 140 students. While waitlisting students is unfortunate, lotteries have positive indications for the schools who require them. High parent interest confirms a successful educational program. Lotteries also demonstrate the accessibility of the schools, in that, as tuition-free public schools, all children may apply. The random lottery selection process promotes diversity in student populations.

Along with growth of parental interest outside of the school, recent figures reveal that superlative academic growth is happening for students inside the schools as well. Jesse Smith, Head of Quality Control for The Roger Bacon Academy, Inc. states that, “Most recently, both schools received the designation ‘Exceeds Expected Growth’ which is defined as ‘Schools whose students are making substantially more progress than the state growth standard/state average’.”

The nonprofit Charter Day School, Inc., which operates Charter Day School and Columbus Charter, has created two identical campuses in Wilmington and Southport to accommodate local parent demand.In New Hanover County, Douglass Academy opened in downtown Wilmington in Fall 2013 and is accepting applications for 2014-15 at www.douglassacademy.net . In July 2014, South Brunswick Charter School is scheduled to open in Southport as another option for Brunswick County families and is  accepting applications for 2014-15 on its website at www.southbcs.org .