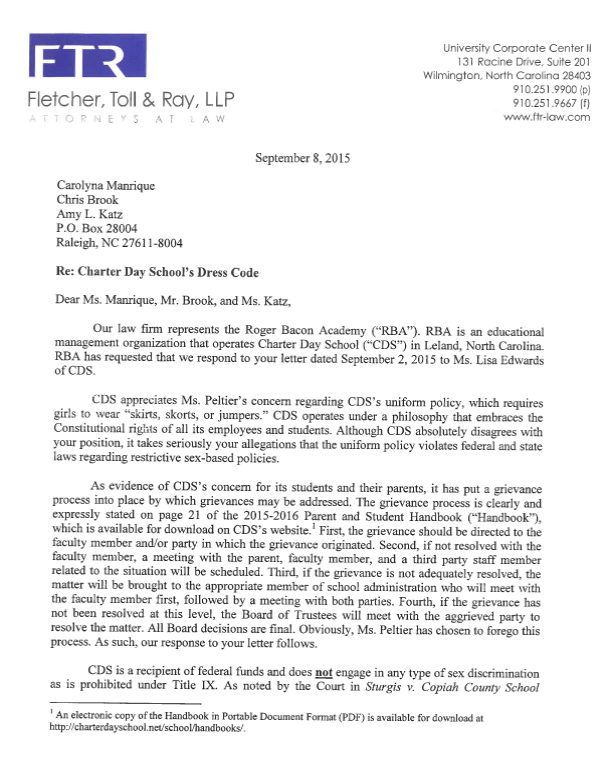 The following provides information for parents about a lawsuit against Charter Day School regarding the school’s dress code that was filed and announced in the media on Monday, February 29. The lawsuit was filed by the ACLU on behalf of three parents.

Background:
Charter Day School has responded fully to all correspondence from the NCACLU and fulfilled 3 public records requests.

Among other items, NCACLU requests included documentation of “disciplinary actions, including removing girls from class or requiring girls to change clothes, because of purported dress code violations.” There are no responsive incidents.

Further, the NCACLU asked for “records of all complaints made to the school and/or to Roger Bacon Academy and/or directly to Baker Mitchell regarding, or requesting to change, the school uniform policies at the school” or “alleging sex discrimination at the school.” The only responsive records to these items are two letters, both from lawsuit Plaintiff, Ms. Peltier, or the NCACLU on her behalf.

CDS’s 2015 annual parent survey confirms that 96% of parents surveyed are satisfied or very satisfied with CDS.  Dissatisfied responses were 1% (6 surveys) and neutral were 3%.

Position:
Linked below is a letter CDS legal counsel George Fletcher submitted to the NCACLU in response to their initial threat of action in September 2015. Mr. Fletcher’s letter describes the legal standing of CDS, and highlights are included below: