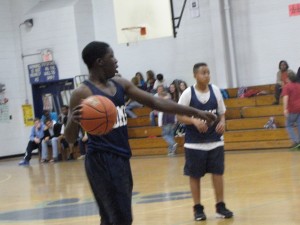 Since the opening of Charter Day School (CDS) eleven years ago mainly two sports have been offered, football and cheerleading.  In 2009, Charter Day School began offering Archery and that program has flourished over its first three seasons.  Now our school offers a new sport, basketball.  The team consists of seventeen boys and one girl across all three grade levels.  “I love being the only girl on the team because hanging out with the guys is just so much fun”, said Jami Boyette, the only girl who tried out for the basketball team.  The team practices twice a week from 4:00 P.M to 5:30 P.M and their new coaches, Dr. Miller, Mr. Fassbender and Mr. Driver mainly focus on the team learning sportsmanship, being leaders and working to improve every day.  The team has just played their first game and even though they lost, they are determined to do a lot better at their next game and their best throughout this season. 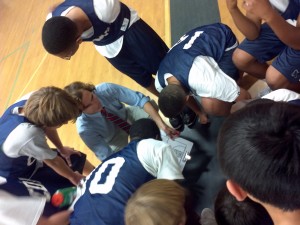 All of the players that were interviewed came to the same conclusion: basketball is a great sport and is really fun to play! “Our players are good sports, talented, and will gain a lot of experience playing,” said Coach William Fassbender.  “They have the potential to win their next game.”  In order for players to stay on the basketball team they have to maintain at least a C average in all of their classes and maintain a level of character within the classroom.  Jami Boyette commented, “The grade limit challenges me to do my best in school but it’s all worth it because I get to play the sport I love.”  The new basketball team, unlike many of the other teams in their division, is still starting out and they are also still getting used to a new coach: Coach Miller.  “Even though Coach Miller is our principal he is still a great coach and challenges us to do our best every time we step on the court,” commented Jesse Morgan on the subject.

As CDS grows into the new sport, the expectations are high.  Many of the players believe that as they grow more as a team and practice a lot more that they will have a lot more potential. “We have improved a lot since last year and Coach Miller works a lot on sportsmanship and helps us to perfect the little things that don’t seem very important but really are,” said power forward Jesse Morgan.  You would think that losing big in your first game might take a hit on a new basketball team but according to small forward Zach Potter, it gives them some more confidence. “Our team definitely has room for improvement, but if we learn from our mistakes we can fix them and we will be a lot better.”  After being outscored heavily in the first half against Cape Fear Academy, the team showed their fortitude and competed hard in the second half only being outscored 19 to 15.  The team is hoping that the next game will be the start of a very successful season.